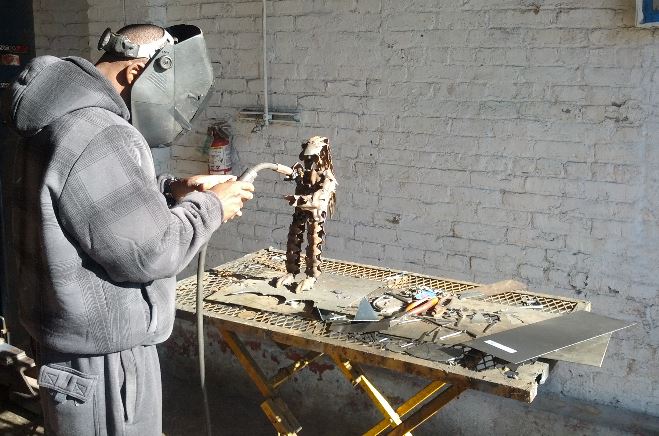 Metalwork sculpture creator Lenny Prince has been making custom sculptures from used auto parts and scrap metal for the past few years.

The New York Times has dubbed him “The Matisse of Mufflers.” His work, known as Lenny’s Creations, has been featured three different times in the Staten Island Advance and his biggest piece, a giant praying mantis, currently greets visitors outside the Staten Island Children’s Museum on the grounds of Snug Harbor.

Lenny’s Creations gallery is located at 16 Rector St in Staten Island and showcases a wide range of Mr. Prince’s creations, from tanks and robots to notable figureheads and even an interactive space ship. All made with those used and recycled car parts.

The showroom itself is 6,000 square feet and contains a wide variety of creations, some of which are interactive. Come down to the showroom on any given day and you could be greeted by anything from a metallic Michael Jackson to a large scale Iron Man replica.

Lenny’s Creations is a shining light of creativity and inventiveness that deserves to be supported. You can check out the gallery by clicking here or see these works live and in person for yourself at 16 Rector St, SI NY.