Home»Lifestyle»Art on Bay»Film on Bay»Did you know? “Ferry Tales” A Documentary Filmed On The Staten Island Ferry Was Nominated For An Oscar in 2004?
Film on Bay

We had a chance to chat with Corinna Sager, producer of Ferry Tales and Kamillah Hanks who was featured in the film and consequentially was the film’s publicist.  Hanks is currently running for the north shore council seat against incumbent Debi Rose.

Ferry Tales is a 2003 American short documentary film written, produced and directed by Katja Esson. It follows the conversations of women in the powder room of the Staten Island Ferry during the morning commute from Staten Island to Manhattan. It was nominated for the Academy Award for Documentary Short Subject at the 76th Annual Academy Awards ceremony in 2004.

“We like to say ‘It was the little film that could’,” explained Corinna, “Because it was about women, Staten Island and female camaraderie combined with a good dose of wit – and those are not generally subjects that make it to the Oscars. It was the beginning of Kamillah’s and my friendship, so it was most fitting to show it tonight.”

Kamillah who graciously featured in the film, greeted her constituents at the Errigo’s event and chatted with us about Ferry Tales “I faked being a publicist wanting to promote the film because i beleived in the north shore of staten island and wanted nothing more than the world to find out about it”

It's NYC Beer Week: Here Are 6 Staten Island Bars Where You Can Celebrate! 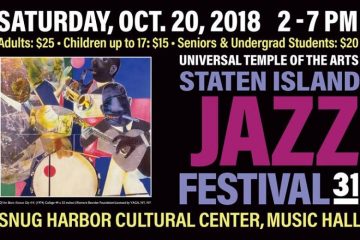