A Closer LOOK: The John A. Noble Maritime Collection 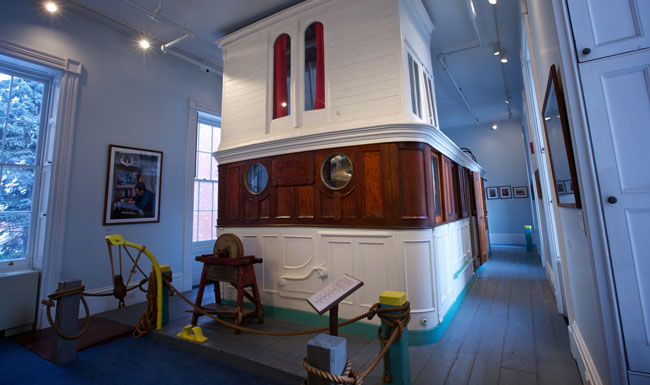 Just because it’s cold outside doesn’t mean at lovers have to suffer from cabin fever. In fact, this is one of the best times of the year to enjoy the North Shore’s John A.Noble Maritime Collection. A museum and study center located on the former grounds of the famous old retirement community, Sailors’ Snug Harbor, the Noble Collection preserves and interprets the art and writings of the distinguished marine artist, John A. Noble (1913-83). continuing Noble’s legacy of celebrating the people and traditions of the working waterfront of New York Harbor while serving and interpreting the history of Sailors’ Snug Harbor, the museum operates a maritime study center inspired by Noble and the mariners of Sailors’ Snug Harbor.

While researching for this article, a basic history revealed that originally founded in 1987 at Noble’s home on Staten Island, the museum opened at Snug Harbor in 2000. Transformed from a former mariners’ dormitory into a beautiful museum, this rehabilitation project garnered the 1999 New York Preservation Award from the Municipal Art Society of New York, the Preservation League Award, and President’s Award from the Staten Island Chamber of Commerce.

The museum features the work of John A. Noble, the maritime artist who chronicled the last chapter in the Age of Sail and the dramatic changes that ensued. It is fully accessible for the disabled and has galleries, classrooms, a printmaking studio, rehearsal and performance spaces, a library, a new, state-of-the-art archive, offices, and a gift shop. Period rooms, including a typical Sailors’ Snug Harbor dormitory room from around 1900, reveal life at Sailors’ Snug Harbor.

Noble’s houseboat studio, the teak saloon of a European yacht, is the centerpiece. The museum has two classrooms, the Soul of Sail Classroom and the Maurice K. Shaw Navigation Classroom, where character-based art and history programs are available to children and adults, and a printmaking studio is available for classes and use by artists.

Among the Noble Maritime Collection’s on-going adult programs are CloseKnit, a knitting group that makes knitted items for mariner’s worldwide and needy people in the community. The museum also hosts A Helluva Choir, an open choir for people “who think they can’t sing,” and an adult writing group that has published one book of its writings and plans another one soon.
Check back for future articles at thiswayonbay.com about the history and accomplishments of the John A. Noble Collection and Museum.