Home»Lifestyle»Art on Bay»WATCH: How The Murals For Cypher Fest Were Created (In A Cool Montage)
Art on Bay/Lifestyle

This past September, we let you know about the first annual Cypher Fest, a celebration of creativity and art on Staten Island. The event was orchestrated by The NYC Arts Cypher, a fixture along the Bay Street corridor. In the clip above, stills and video illustrate how much of the art for the festival was created and in some cases even bring viewers behind the scenes look at the works in various stages of completion.

Charlie Balducci, NYC Arts Cypher’s President and Founder, created the event in part as an avenue to highlight the organizations like Pillz Killz, as well as Anti-Bullying campaigns, and to make locals aware of their Mural Program. (FYI – The organization is now accepting applications for apprenticeships)

The video below shows Staten Island wunderkind, DJ Fussyman, being presented with a mural created in his likeness by graffiti artist, Jorit Agoch.  Agoch, a world-renowned street artist, was a main attraction of the event. 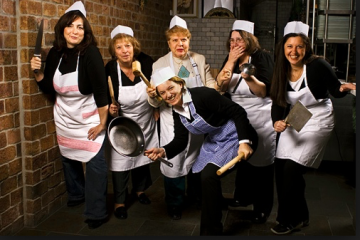 Enoteca Maria… Go Get Yourself a Grandma that Can Cook!!!