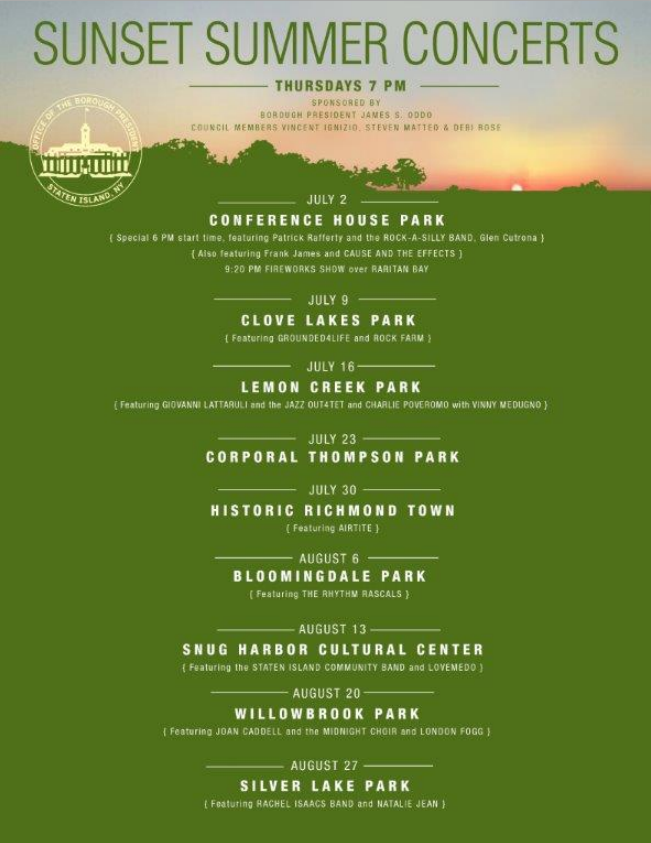 The office of the Borough President announced that the 2015 Sunset Concert series earlier this summer. If you haven’t made it out to any of the shows yet, there are still a handful for you to attend. The next concert on the schedule takes place in Historic Richmondtown in July 30th, features “AIRTITE” and begins at 7pm.

Here’s some more information from StatenIslandUSA.com with a list of the shows remaining for this Summer:

Borough President James S. Oddo has announced the dates and locations for the 2015 Summer Sunset Concert Series. The series is made possible by the Borough President and Council Members Vincent Ignizio, Steven Matteo and Debi Rose. In addition, he announced two other special events – a free Doo Wop concert and the popular Back to the Beach festival.

All Thursday night concerts will begin at 7 pm. The concert schedule is as follows:

“I am happy to partner with my colleagues from the City Council to present these concerts in various parks around the Island,” said Borough President Oddo. “We are excited to offer this free entertainment to Staten Islanders while giving some of our homegrown talent a chance to show off their musical skills.”

Vito Picone, headliner of the Doo Wop show on August 15th, said, “We’re looking forward to going back again this year; it was an honor last year. Nothing feels quite like going home. The fans had signs welcoming us back. There’s nothing like being part of Staten Island.”