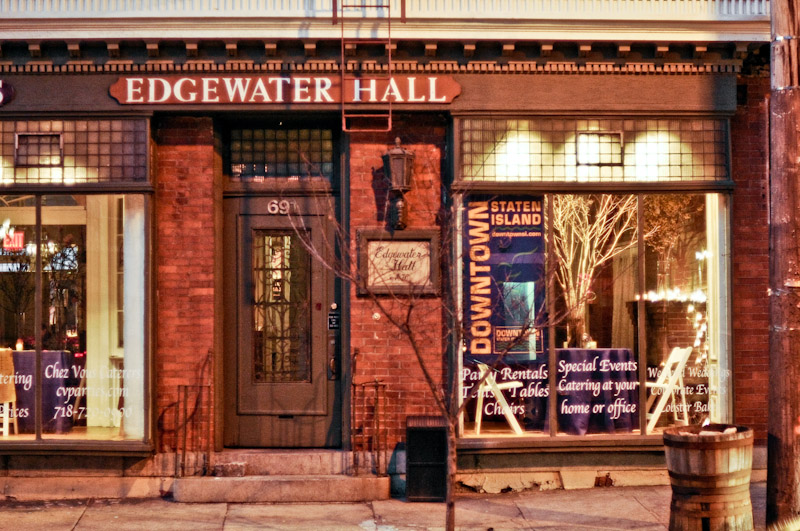 Stapleton, a waterfront town rich in architecture and history lies between the Staten Island Ferry and the Verrazano Narrows Bridge.

One of the Island’s oldest neighborhoods, Stapleton was built in 1836 on land owned by the famous and influential Vanderbilt family and is named after William J. Staples, the man who laid its streets and established ferry service in 1817.

With its remarkable buildings and colorful history, Stapleton has been and promises to be a major commercial center once again due to its proximity to the New York Harbor, The Staten Island Ferry (which transports approximately 75,000 people daily) and the Verrazano Bridge.

The Historic Edgewater Hall located at 691 695 Bay Street, has been at the heart of Stapleton’s social scene for more than 140 years. Built in 1876 as an event space by Michael Nynan and later used as the location of Staten Island Savings Bank.

Today, the floors all differ and have a spectacular view of the Verrazano Bridge. Cool Artwork graces the wall, and in the cellar lies Amendment 18, an underground bar with brick arches, antique bar and the bank vault that was once a speakeasy frequented by the Vanderbilts and Barrymores during the prohibition era.

695 Bay Street, home of Gatsby’s on the Bay, was once the home of a brewery owned by George Bechtel. Abundant local springs and a steep hillside perfect for “lagering” beer in caves attracted George Bechtels and in 1853, he founded the original location of Bechtel’s brewery on VanDuzer at Broad Street and then opened the second brewing location at Edgewater Hall.

Stapleton’s history always included social activities which fueled the economy. Starting in the 1800’s, the brewing industry provided the community with picnic grounds and dancing halls, opening with the start of the spring season in April, and ending with an Oktoberfest celebration in October. The industry was considered a respected tradition and provided a good income for thousands of Islanders over the years, leading the way in technology and even adding its own special German culture to the Island’s social scene. Prohibition ended the local beer industry and gave birth to widespread Speakeasy’s — one of them being Amendment 18 in the cellar of Edgewater Hall.

Theatre and social life soon added its own flavor to Stapleton’s social scene. Maurice Barrymore, a famous Vaudeville actor and founder of the acting family dynasty, had a farm on Staten Island in the late 19th century where he kept his collection of exotic animals. Maurice appeared in local plays held in Edgewater Hall. His children, John Barrymore, Lionel Barrymore and Ethel Barrymore’s amateur stage appearance was in Fort Wadsworth, where they lived with their grandmother Louisa Lane Drew. Actress Drew Barrymore is his great-granddaughter.

Stapleton’s 20th Century Renaissance is happening again. There is a boom in commercial and residential real estate development in the North Shore, including public plazas, the Empire Outlets and the NY Wheel.