If you want your wedding to be memorable, you have to do something that makes it stand out from the rest. Some couples choose a quirky theme, others have interesting food options. Keith and Bethany orchestrated an unauthorized wedding that only New York City could host. Specifically, they planned a wedding hosted by the John J. Marchi, of the Staten Island Ferry fleet, that the NYC DOT was not aware of. After taking their vows in the harbor, the inventive and adventurous couple took to the NYC subway en route to Radegast Hall & Biergarten in Williamsburg where the couple had their reception. You can see their run and gun wedding in the video above.

Groom Keith Haskel (who married Bethany Hall) tells us, “Man, it could’ve went so poorly (90 degree day and predicted thunderstorms), but it nearly went off without a hitch! The bride was 15 minutes late, so we missed a ferry or two, but no one ever tried to stop us.” The whole affair—which included a trip on the subway to a party in Williamsburg—was filmed, and you can watch it below. It’s the most NYC wedding we’ve ever seen… and as such, mass transit provided the day’s only hiccups.

After the ceremony, Keith made note of the fact that the Staten Island Ferry is underappreciated. “I gotta say, the Staten Island Ferry is an incredibly undervalued NYC resource. It’s free, so we saved thousands on a venue, you’re allowed to drink on it, so popping champagne is fair game, and it’s BEAUTIFUL!” We here at TWOB tend to agree. (Ecxept for the unauthorized wedding bit, we don’t recommend that. The DOT probably isn’t in love with the idea.)

Gallery: In The Wings' Beauty and the Beast at Snug Harbor Cultural Center 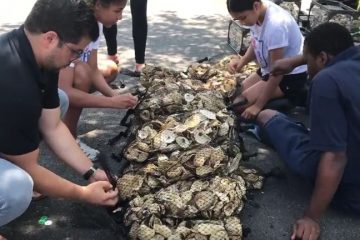 How The Billion Oyster Project Will Help Staten Island’s Shoreline