Lately, there have been quite a few whale & dolphin sightings around NYC that have caused quite the stir and fascination from people on and around Staten Island. If you are one of those people and are looking for more information about these sudden sightings, then you’ll want to check out the Gotham Whale project.

In their own words, Gotham Whale, “intends to inform and contribute to the public knowledge as whales meet New Yorkers. The juxtaposition of wild populations of marine mammals; seals, dolphins, and whales, with the millions of people that inhabit The City, can be the source of intriguing knowledge, incredible enjoyment, and sometimes, tragic disruption. Gotham Whale will be a source of education, advocacy, and science for the inhabitants of New York, terrestrial and marine.”

Basically, the waters around NYC used to be home to all kinds of marine life that we don’t really see as common these days. But with technology growing and our ability to keep the waters cleaner, much of that sea life is returning to our area. This includes everything from oysters and seals to dolphins and whales.

One of Gotham Whale’s core missions is to spread their message of “Citizen Science.” This is a movement to allow everyday people the chance to help out with scientific research by making observations & collecting, processing data. A great example of this is the Audubon Society’s Christmas Bird Count, running since 1900, Gotham Whale will model their campaign after this by having the whale watching activities of the American Princess and other boatmen provide a platform to collect data and make observations along with maintaining a running archive for the many amateur sightings of whales along the waters of NYC.

New York City, and Staten Island especially, has a long history of maritime culture dating back to the colonial days. While much of this activity has brought new business and opportunities to Staten Island, it has come at the expense of ravaging the sea life in the area to a large extent. Which is why the fact that we are seeing creatures such as whales returning is such a big deal.

This is not the first time in recent memory that we have seen a group working to raise awareness about the history of eroding sea life in the NY Harbor. The Billion Oyster Project has been working for years to add oysters to the waters around NYC in order to both create and restore a natural reef to the area & to use the oysters to filter the water.

According to their website, “Oysters have a remarkable ability to filter nitrogen pollution from water as they eat. This is a heroic feat, because excessive nitrogen triggers algal blooms that deplete the water of oxygen and create “dead zones.””

With movements like Gotham Whale & Citizen Science taking up the call for education and documentation of the status of sea life around NYC’s waters, now is the perfect opportunity to get involved. You can head on over to Gotham Whale’s website right now to learn how you can take action & click here to learn more about the Billion Oyster Project. 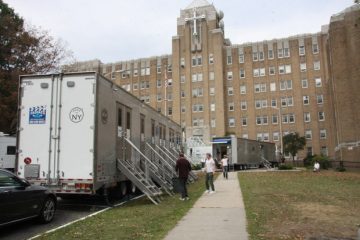