Home»Uncategorized»WATCH: Could Staten Island (and Other Parts of NYC) Be Under Water Within 200 Years?
Uncategorized

When the ocean moves into populated areas, it takes liberties with the man-made structures in its way. Unfortunately, there are many Staten Islanders who have experienced this first hand in 2012’s Superstorm Sandy.

In the video above, Ben Strauss, a VP of Sea Level and Climate Impacts at Climate Central, shows what New York City would look like should the sea level rise at the rate that his nonprofit is (and a number of other climate change scientists are) currently predicting. New York magazine covered this in detail in their piece “When Will New York Sink?” The article, which explains how melting glaciers and the natural process of subsidence are slowly transforming NYC into the next Venice (and then some.)

To behave as if the New York coastline is an immutable fact is to disregard not just science but history. Over a few centuries, humans have thoroughly remade the city’s topography, leveling hills, channeling streams, draining ponds, creating new landfill out of construction debris. When workers were excavating the foundation of the redeveloped World Trade Center, they discovered, buried deep beneath the ruins, the hull of an 18th-century shipwreck — an eerie reminder that even our tallest towers sit on land claimed from the water. Our ingenuity, and our real-estate speculation, have made the city a continually expanding entity. We are not used to contemplating contraction.

The backbone of the article is sourced from an interview with Professor Klaus Jacob, a German professor affiliated with Columbia’s University’s Lamont-Doherty Earth Observatory, who explains a theory that parts of New York City, including areas on Bay Street and Richmond Terrace on Staten Island, could be under water within 200 years.

The deluge will begin slowly, and irregularly, and so it will confound human perceptions of change. Areas that never had flash floods will start to experience them, in part because global warming will also increase precipitation. High tides will spill over old bulkheads when there is a full moon. People will start carrying galoshes to work. All the commercial skyscrapers, housing, cultural institutions that currently sit near the waterline will be forced to contend with routine inundation. And cataclysmic floods will become more common, because, to put it simply, if the baseline water level is higher, every storm surge will be that much stronger. Now, a surge of six feet has a one percent chance of happening each year — it’s what climatologists call a “100 year” storm. By 2050, if sea-level rise happens as rapidly as many scientists think it will, today’s hundred-year floods will become five times more likely, making mass destruction a once-a-generation occurrence. Like a stumbling boxer, the city will try to keep its guard up, but the sea will only gain strength.

There’s a ton of interesting insight in the piece as well as details re: the science involved in these predictions. It’s probably a good idea to learn more about it, as Staten Island is poised to be strongly affected if and when it comes about.

Read all of “When Will New York City Sink?” on New York Magazine’s website, here 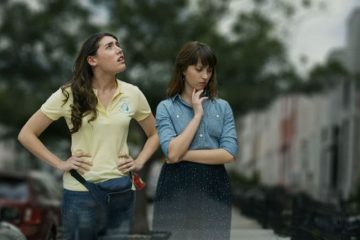 Comedy on Bay/Film on Bay